With every purchase of a RinseKit Sport you will be entered to win $900 in prizes!

Everyone knows about Shark Tank. Whether or not you’ve watched the show, there’s no doubt you’ve heard of it, or at least about the concept of it. You also may or may not know that RinseKit was on Shark Tank in the infancy of the company; an experience that bolstered awareness of our brand and gave founder, Chris Crawford an unforgettable experience.

The idea behind Shark Tank is that small startups or businesses pitch their business or idea to a panel of “sharks” in hopes of landing a “deal”. These “sharks” are high level business moguls and investors, which include big names like Mark Cuban, Richard Branson, Barbara Corcoran and many more. The “deal” that the startups or business owners are hoping to reach with the shark is usually either some kind of investment or marketing help, and depending on the pitch, some startups get great deals, and some get none at all. It’s a high drama and exciting show, and the fact that it’s real businesses making real deals makes it even more interesting.

Our founder Chris Crawford pitched RinseKit back in Season 8 of Shark Tank when RinseKit was still in its beginning stages. The pitch received millions of views and made people aware of what a portable shower was and how it could benefit them. To gain some insight into what it was like to go on Shark Tank and what the appearance did for RinseKit, we sat down with Chris to get further insight into his Shark Tank experience. Here are excerpts from the video interview we did with him that can be found here:

Q: How did getting on Shark Tank happen?

Chris: When we first started the company, 8 months into it we decided to do a Kickstarter campaign. The Kickstarter campaign kind of went viral, so we got a lot of views on that which was pretty cool. As a result of that, one of the producers of Shark Tank actually reached out to us. That was awesome because we had thought about going on Shark Tank, but we initially didn't want to go through the whole process. They saw how well we were doing on Kickstarter and basically told us that they wanted us to come on the show; surpassing over 40,000+ applicants that apply each year for a chance to make a deal with the sharks.

Q: So when you first did the pitch, was it to a group of investors or people who work with Shark Tank first?

Chris: So there’s a whole process you have to go through first before anything happens. They send you a giant legal document to verify that your business isn’t a scam or a knockoff. They do their due diligence pretty well. You fill out a lot of paperwork, you send it to them, and then you wait months.

When they get back to you, they ask for you to send them a video of you doing the pitch. We had to videotape ourselves and it took us all day to get it right. We sent that in and then it was just crickets for a while, so that was kind of nerve racking. They finally did get back to us, and told us they wanted us to come in and actually pitch.

Q: So then what happened?

Chris: So what they do is they get you to come up to their LA studio. You go in and they have you waiting with a bunch of people, and then they tell you you’re going to go out there and pitch to the producers. They set up a little table for you to display your products like you would on TV, and you go out there and there’s like 40 people on computers taking notes. Nobody’s looking at you while you do your pitch. When you’re done, they tell you how they’d like you to change your pitch for the actual on-screen performance, like be more animated or whatever. Then you go home.

Q: At that point were you already fulfilling orders?

Chris: Yeah, we had already been a company for awhile. You know, you don’t have to be a non-existent company to be on Shark Tank. They take companies that are new, or that have been going for a while and need investment. Anyways, we went home, waited for a while, and they finally called us and said we were in. They scheduled us for around 7 months after that.

Q: Were you nervous at the time?

Chris: We were super nervous. That’s when you’ve really got to start looking at your numbers. I knew at the time that I was going to bring a guy who could do math in his head pretty well. When the day finally came, we went and got a hotel room near the studio. We didn’t sleep that well.

The next day, we went to the studio. They put makeup on me, cut my hair, and trimmed my eyebrows. After we were all groomed, we went and sat in a waiting room for around 6 hours. Finally, they came in and said “alright, you guys are up.” So we walked out there - I was probably talking super fast and all excited. You just want to make sure you don’t sound stupid or make the company look bad.

Q: Did you do the whole pitch in one take?

Chris: We were there filming for probably like an hour. All those sharks are really smart. They went straight to the numbers - they honed in on that. Basically, they all started asking questions at the same time, and we would answer in order - we just did that back and forth. It’s weird because on the show there’s music and stuff, but when you’re on set there’s no music. All you hear is the fifteen cameras buzzing around you, which you can’t look at. It was pretty cool.

As far as the Shark’s reactions, Cuban was like “I love it, I’m tech, but it’s not for me - I’m out.” He was out right away, but then everyone else came back with an offer for us. So that was really cool. They were all very interested and nice, and no one really attacked us.

Q: Did RinseKit get a Deal on Shark Tank?

Chris: Yes, RinseKit did get a deal with Damon. We had four offers and Damon’s was the best by far.

After the show, we got with Damon’s team and started talking about the details of the deal. We kind of negotiated back and forth for a couple of months. He was a super nice guy, but at the end of the day we decided that it didn’t make sense for us to work with him. So we didn’t end up doing a deal at the end of the day. 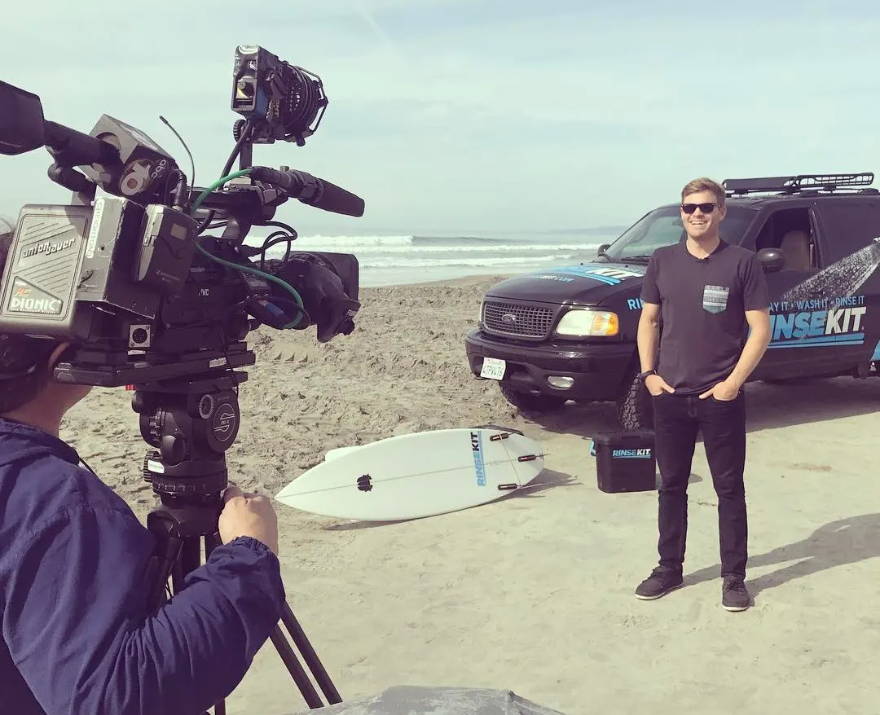 Q: 4 years after Shark Tank, how is RinseKit doing now?

Chris: RinseKit is cranking, we’re doing great. We’re bigger and better and have new products, and we have only grown since Shark Tank. Shark Tank definitely helped, it’s awesome, and if you can do it you should. I would do it again, honestly. It definitely was super nerve racking, but once you do that you reach a new confidence level with your pitch and your product, as now you’ve pitched it on national TV.

The hard long haul that most people don’t get with any business is it’s hard, it’s not going to just happen overnight, typically, and it’s very rare that you get those unicorns that just take off. You’ve got to work at it day in and day out for years and years and years and make a lot of mistakes and keep going no matter what.

Q: How is the product different now as compared to when you pitched it on Shark Tank?

Chris: So, my background was that I had a pool construction company that I started when I was 19. I also did a lot of plumbing, understood water pressure and stuff like that. The thing with pool filters is, when the pump is running, the pressure from the filter pump will basically compress the air in the tank, and then when you shut that off it pushes that back out, and it’s like it has water pressure even though the pump is off.

Back then I was surfing all the time, and wanted to figure out a way to use that concept of compressing air to create a way to wash off after surfing. So I got a big long pipe, and put a cap on it, and you could just charge it up with a garden hose, and it would compress the air in the tank that was trapped in there, and then that compressed air would push the water back out. So that was something that we invented - using that compressed air to drive water back out of the tank. That was around 2013.

I made more of those compressed air tanks out of pipes and turned them into roof rack surf showers for some guys. Everyone was telling me it was cool and that I should look into it more. So I ended up selling my pool company. Along with some investment, I threw my money into building the tool and the box that would be the first official RinseKit.

We rocked the pressure game for a while, where you would basically fill it up from the water pressure in your house, and it would push the water back out because the air was compressed. That allowed us to have the “self-pressurized portable shower” we became famous for.  When you do that, you have to have a cylindrical tank in there, and a quarter of that is used for the compressed air.

So it’s cool because there’s no moving parts, but if you don’t have a hose spigot, or you want to go out and fill it from a lake, there’s some limitations. So a couple of years ago, we realized it would be cool to just be able to flip a switch and get water pressure immediately. So now we have the RinseKit PRO - it’s in the same size bucket as the RinseKit Plus but has more capacity, 3.5 gallons, as it doesn’t need a quarter of the tank to pressurize the air.

Q: So you can fill it with water from any source, and just press a button to have a portable shower?

Chris: Yeah, there’s just a little cap you can pour water straight into, from your sink, a water bottle, your hose, wherever. Then you just press a little button there on the top and boom - you have 3.5 gallons of pressurized water for using anywhere.

The PRO took years to develop. The stuff you’re seeing coming to market, like our new spraying and misting insulated water bottle, the RinseKit Sport, that took like a year and a half or two years at least to develop. All that stuff, you have to make it, you have to cut the steel, you have to get a tool made, you have to make adjustments. It’s 6 months of just testing the thing you made, and that’s if the engineering was good.

Q: So to wrap things up, what advice would you give someone who wants to go on Shark Tank? Would you say it’s worth it?

Chris: I would definitely do it if you have the opportunity, it’s great. Unless you have some gaping holes in your business that you don’t want to be exposed on TV because they’re going to find out. Everything went as well as we could have wanted it to go.

To learn more about RinseKit, Chris’s story and our new products - check us out here:

Taking a Hot Shower When the Power is Out: Should You Do it?

Portable Camping Sinks: What are your options?

5 Uses for a Camping Shower Tent